I haven’t always been challenged with directions. Reading signs and understanding where I’m going was something I did easily when I was young. I remember driving with my father and looking at the map. Usually, it was somewhere up north. He helped me understand how to read a map and the street signs. We never did any driving trips to Quebec so there was no need to learn or understand the Quebec road maps. I could have used some of that Dad support today! You see my Dad is originally from Val D’or Quebec, speaks perfect French and always knew what to do when we were lost.

There were a few times last night when MJ’s daughter was giving me the directions from Rosemere to Montreal on the commuter train that I had this thought; I should take an early train just in case I lose my way, or something happens. Funny I know my intuition is good and reliable, and I often don’t listen to it.

MJ kindly got me to Rosemere in time to buy a ticket and get myself on the train going to Montreal. It all seemed so easy, get on the train, travel for 50 minutes to arrive in Montreal, transfer one station, which will drop me off at the Montreal Via Rail station with plenty of time to make my train back to Toronto. I had about 1.hour and 20 minutes total.

The  train was a very clean, only a couple of us on it. I did not have a map; that was my first mistake. I had trusted that the directions we looked up online the night before, thinking it was all that I needed to know.

As I sat there on the train not paying attention (my second mistake), I could hear the announcements in French for the upcoming stops. I have a map app on my blackberry that I was playing with watching the little blue dot moving towards Montreal. I didn’t need to know what the announcer was saying, we looked like we were going in the right direction, and I was on the train that would take me to the very last stop just like the directions told us last night.

I did notice that we were at Parc station for a couple of minutes and thought to myself, why aren’t we moving? It didn’t occur to me to ask someone and then when it did; there was no one to ask. Finally, someone got on the train and this young man – very nicely told me we were on our way back towards Rosemere.

I literally swore at him using the F word. You could see his surprise as I realized I was now on a moving train going in the wrong direction! Au mon dieu!

Time was ticking; I took the late train, only giving me an hour to make my train in Montreal back to Toronto. What was I thinking?

My anxiety level was rising with this new set of circumstances; the train backtracking, the fact that this young man wanted to help me so badly. He was trying desperately to figure out the time of the next train going to Montreal, and I’m realizing I didn’t have time to sort this out, I needed off this train now!

Time slowed down. It was only about three minutes that had passed but my realization that I might miss my train to Toronto was just too much.

As I was waiting for the train to get to the station so I could get off and get myself back on track, the helpful young man told me that the station I was getting off at Chabenel was  isolated and won’t have any taxis. 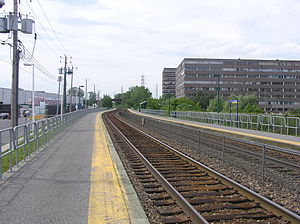 He was right – it felt like something out of the American movie where a woman, travelling on her own against all odds gets into some kind of illegal trouble….. the camera zooms out, and you see this lone person standing on a train platform, isolated.  I quickly dismissed that thought, as I had to figure out how to get to Montreal fast! My bag was heavy I had on the worst boots for walking, and I had only one mission find a taxi now!

This reoccurring thought keep pestering at me; “you could walk across the tracks, throw your suitcase over the 3 foot high fence and wait for the next train to Montreal”

Logic won over crazy, and I found the stairs that took me under the tracks and to an intersection. I watched for about 3 minutes to see if there were any taxis, not one, more crazy thoughts; I could ask one of these cars to take me to Montreal….it’s so interesting to me when in a crisis my mind comes up with many irrational solutions. The National Bank logo caught my eye, I knew I had to go towards them; they could help me find a taxi. 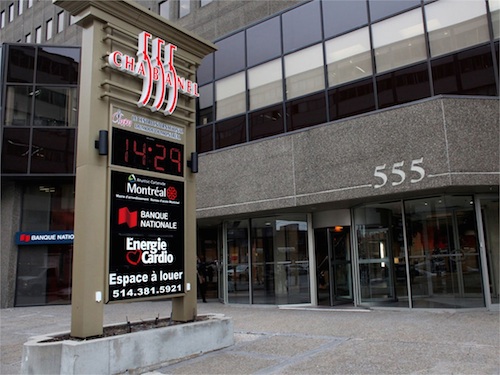 As I passed each person, I evaluated them, how weird do they look, could they be kind and give me the correct information or are theygoing to take advantage of this panicked English speaking only woman?  No, I had to find some woman who could relate to me as a human, someone my age….I’m so weird, why would that have mattered? As I looked over at the mirrored windows of the building, I didn’t recognize myself, clearly not the typical confident, calm energy I normally have.

Finally, I saw two ladies standing outside the building smoking and so I asked…do you speak English? – They must have thought I was a fool. Of course, they speak English; I dismissed that thought quickly, and I told them what was happening. Could they help me find a taxi?  They were nice enough to suggest I talk to the security guard in the building. He called me a cab, and that was the beginning of everything falling into place.  As the cab pulled up, I was excited to see the driver was female. Somehow this made me feel secure, a nurtured even, without even speaking to her yet. Another strange thought.

She quickly eased my panic by suggesting I get on the Via Rail train at Dorval – of course she was right I could do that. I needed to make sure first, so I called Via Rail and with no problem I was told I could get on at Dorval. Suddenly my panic began to decrease as this voice of reason was now supporting me to sort out my crisis.

Samantha, the cab driver, was an angel showing up for me today. Samantha, thank you. Thank you for relieving my anxiety and concern. She told me she was one of seven women in the Co-Op cab company. Wow, they are very lucky to have this employee. She got me safely to the Dorval station with 15 minutes to spare.  What a  wonderful experience she gave me.  In those last 5 to 10 minutes I had with her in the cab, she made me feel calm, confident and grounded again. A wonderful ending to my 52-minute crisis.

I had 7 hours on the train home to reflect on what had happened. I pride myself on being calm, centred and in control. Of course, that is a “story” I have made up about myself because I’m not always that. 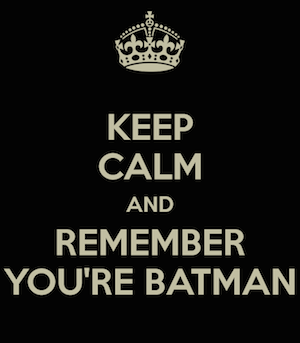 Even though, I’ve been living with Bipolar Disorder without an episode for 17 years, I am still triggered by certain situations. What I forgot at the moment I realized I might not make my train back to Toronto is, I have a lot of experience problem solving in complex situations. It’s similar to the Batman effect that Dave Logan speaks about here. I needed remember who I was and my abilities, I just needed to show up. And now that I can reflect on the events, I did, and I think I could have done something more to lessen the anxiety I was going through at the time.

For instance, I could have easily taken 30 seconds to do some centring and in those moments of panic, I got so focused on my end goal (getting on the Toronto bound train) that no other thoughts could be realized.

I continually need to take care of myself because life is going to serve up triggering events and situations. I have no control over that, what I do have control over is how I prepare myself. What could I be doing consistently to develop those coping strategies that I would, or could, use in times like the one I described above? It’s a good question and one that I have been inquiring into since travelling home from Montreal.

One example I can share is I’m currently in the Mindfulness Based Stress Reduction  (MBSR) class created by Jon Kabat-Zinn. The course offers many tools to support the uncertainty that life offers. Tools that have us focus on the present moment and our breathing. The theory is the more we can keep ourselves in the present moment the easier it is to manage and handle all the ups and downs life throws at us.

During the 52 minutes I described above I was only thinking about the future, not the present moment. The events could have unfolded differently if I had used any of the mindfulness tools offered in the course. I could have seen all the beauty of the present moments vs. the all the potential problems. It’s good to reflect on situations like this. There’s research about how, after enduring some “traumatic” experience and getting some distance from it that (a couple of days) it’s helpful to write or journal about it. This can provide perspective and the ability to see how things could have been different.  Doing this moves you towards focusing on strategies versus the fear.

All there is to do is practice.

From our MBSR course there is a saying we use:

it does not mean to be in a place where this is no noise, trouble or hard work.

it means to be in the midst of those things and still be calm in your heart.

Please note: I reserve the right to delete comments that are offensive or off-topic.

Subscribe to my newsletter and Get a FREE EBook! 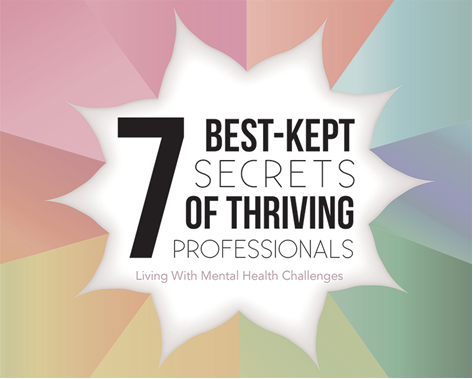 My newsletter Thriving in the Workplace Insider is a biweekly advice column where I answer community questions about living with a mental health challenge as a working professional. Just for subscribing, you get a copy of my eBook: 7 Best Kept Secrets of Thriving Professionals Living with a Mental Health Challenge.

I promise your email address will never be shared or abused. 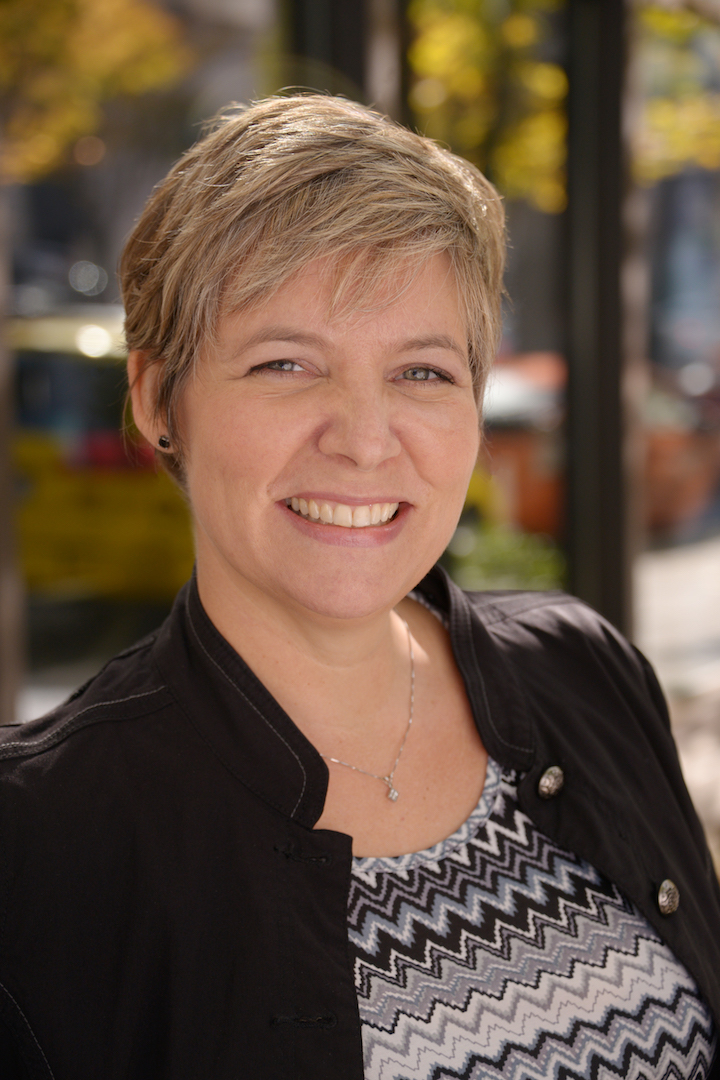 In 2007, I made a life-changing choice to speak publicly about my journey with bipolar disorder. After ten years of hiding my mood disorder out of embarrassment, shame, and fear of judgment I now openly speak about my experience and journey and am delighted to support organizations to raise awareness about mental health in the workplace.